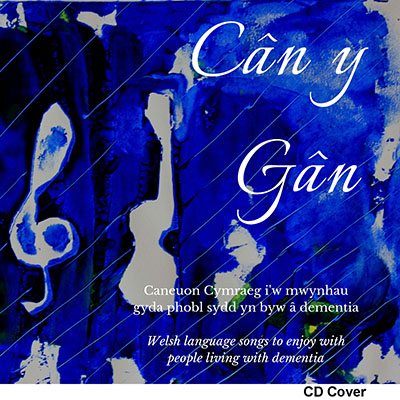 Why is a resource like Cân y Gân so important?

Music is a potent force in our lives and we each have a song that raises a smile. Music empowers us to recall a feeling or an emotion and enables us to relive a distant memory. Research shows the positive effects that music has on reminiscence, and that it can be used as a means of easing depression and apathy and contributing to an improved quality of life for individuals living with dementia (van der Steen et al, 2018) Considering the relationship that many Welsh people have with music there seems to be a shortfall of Welsh language music provision when caring for people living with dementia in Wales. Cân y Gân is an album to enjoy these Welsh gems with family, friends or residents in your care.

‘Cân y Gân’ is a contemporary folk song composed by the Welsh artiste Alun Huws, commonly known as Sbardun. It has been widely performed by the Welsh singer Linda Griffiths, and originally appeared on the album ‘Llais – 6 unique voices from Wales’. The original song was inspired by a visit to a care home where Sbardun witnessed the profound effect of music on residence living with dementia. He noted: ‘The programme showed the power of playing familiar songs to residents living with dementia and the effect this has on them'.

Contributions from individulas living with dementia

The cover showcases artwork created by Phil Townson, a talented musician who lives with dementia. The design is one of the many artworks he created during the Dementia and Imagination research project. The art sensitively blends the themes of this new initiative, with music being a clear and natural influence.

We have also discussed our work with Welsh speaking members of an Alzheimer’s Society group. Here are a few their comments (translated):

“I think that it’s important that people can listen to the music that they enjoy. There isn’t much variety of music where live and it’s difficult listening to the same stuff all the time.”

“Music from my 20s would help me to remember the good times in my life; the music of Dafydd Iwan especially.”

“I think that it’s important for staff in care homes to be aware of this resource once it’s released; the staff as well as the Managers. Even more so, staff who don’t speak Welsh.” 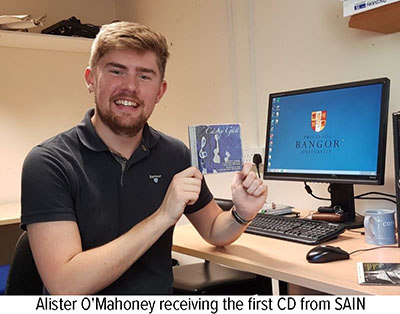 Cân y Gân has been a collaboration from day one and recognition must be given to our sponsors and contributors. Special thanks music be given to Merched y Wawr for their unfailing support. And to the Centre for Aging and Dementia Research, Welsh Language Music Day, and Sain for their continuing assistance and support. Alister O’Mahoney, a Music Graduate also worked on the project as part of Bangor University Internship programme.

However, it has been our contributors that have ensured success. Thank you to the people of Wales for sharing the favourite songs of their youth. Without these, Cân y Gân wouldn’t stand for anything.

Cân y Gân was initially launched at Hafan y Waun Care Home, Aberystwyth back in February 2019. The effect of Welsh music for the residents was certainly witnessed during the launch and the need of such a resource proven.

Online votes opened a few days following the initial launch and many suggestions were entered by the audience attending the the semi-final rounds of the Choir of Wales competition (Côr Cymru). This offered the perfect opportunity to collect almost 600 nominations from Welsh speaking music lovers.

The CD will be distributed to carers and care homes across Wales in partnership with Merchyd y Wawr.  You can also access the songs digitally from this link and download all the song words here.

The CD was launched by the Welsh Government Minister for International Relations and the Welsh Language, Eluned Morgan AM.  You are warmly invited the Bangor University stall during the National Eisteddfod, Llanrwst, on August 9th at 1pm to celebrate the launch of the CD.

If you would like to create a fully personalised playlist for someone living with dementia, please following the link below.
Playlist for Life www.playlistforlife.org.uk
Facebook https://www.facebook.com/groups/308509843135214/
Twitter https://twitter.com/canygan